It’s really hard when you want to talk about Once Upon a Time with people, but nobody seems to watch it. And you can’t very well just start talking about it because they start giving you these dirty looks. Or comments like: “Wait…you think Captain Hook is hot?”,”Belle and Rumple….? Um.”, or Peter Pan is evil?”. All very reasonable reactions and questions, but they would understand if they actually watched the show. So here’s the top 5 reasons for why you should be watching Once if you’re not already:

Strong, independent women: One of my favorite aspects of this show is the female empowerment. Actually, I just wrote an essay and did a presentation on Emma Swan. The women on this show are strong and are not overpowered by their male counterparts. Snow White? Yeah she saved Charming’s butt from being attacked by trolls. Emma Swan? Oh, she just saved Hook’s life on more than one occasion and dug herself out of the darkness. Regina? Only the sassiest, most independent woman ever. Not only do they kick some booty, but they are completely their own entities. They don’t whimper in fear and let the men save them. As Emma Swan says “the only one who saves me is me”. So, yeah this show is pretty progressive.

Magic, Disney, oh my!: Do I even have to explain this? Who doesn’t love Disney? Or magic for that matter? Most of the viewers of Once grew up on Disney movies. Except instead of the balls and puffy dresses, our princesses and princes as we once knew them have ventured into a dark place. Yes, meet fairytales gone dark. And you may be scratching you head and wondering why you’d want to see a dark version of a Disney movie. You have every right to be concerned, but I once thought the same thing. Now here I am, addicted. Not only do we get to see a butt kicking Snow White, but we see Captain Hook as a hot hero and Peter Pan as a villain. Trust me, it is something you definitely want to see!

Hope: This show is all about hope. Just when you think everything that could have gone wrong does, the creators make sure the viewers still have hope. Not going to lie, sometimes I think they’re just yanking our chains. Nonetheless, every character seeps with hope. We had hope when Emma and Henry lost their memories. We had hope when Emma turned dark. We had hope when Hook died. (Still pending, but he’ll be back I am sure). Because there has been so much misery regarding the next few episodes, I think it’s good to remind people that there’s always some kind of hope.

Redemption is always possible: You would think that someone as evil as the Evil Queen or the Wicked Witch or Captain Hook would never get a redemption arc. But guess what? They do! Personally, I love the evil characters on this show. Their back stories are wonderful and they really prove themselves. Even when they’re evil, you can’t help but feel bad for them. However, they get their happy endings too. At least for now. Honestly, I loved Regina when she was evil. I love Zalena even though she’s insane. Hook, well I like him good, but he was super hot evil.

OTPs and shipping: From Snowing to CaptainSwan to OutlawQueen to Rumbelle. There are so many amazing couplings on this show it’s hard to choose a favorite. Personally for me I adore CaptainSwan. Each couple has their own dilemmas, their own romance, and their own uniqueness. Just when you think you have them figured out, well you don’t. What I love is that everyone is given a chance at love. Hook didn’t think he deserved Emma’s love, but she ventured to Hell to make sure he understood he did. Regina thought nobody would ever love her until Robin came along. Rumple…well he never thought Belle would see the man behind the beast. My favorite part of this show is the true love. It works and there’s always hope.

And bonus! The hot guys: Honestly, look at them. No explanation really needed here. 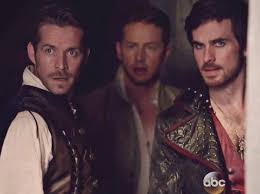