With season 6 about to premiere in just over two days, I decided that it would be fun to take a trip down memory lane and choose 100 moments that Emma and Hook made us swoon in seasons 2-5. Let’s begin!

(Also, I have to apologize. My original plan was gifs, but each time I went to upload the gifs or add them to the post, WordPress would freeze and crash, so I resorted to a photo collage for each moment. Hope you still enjoy!)

1. (The Doctor) Emma and Hook meet for the first time in anything but a romantic scenario.

2. (The Doctor) It didn’t take long for Emma’s superpower to kick in. She grabs an unsuspecting Hook and threatens him with a very sharp dagger!

3. (The Doctor) Things only get worse for Hook when Emma has him tied to a tree, threatens to leave him to become an ogres dinner, and when he finally tells the truth, she once again points the weapon at him.

5. (Tallahassee) We can never forget their first adventure together; climbing the treacherous beanstalk. Mid-climb, Hook reveals to Emma that she is an open book to him and he is easily able to read her. 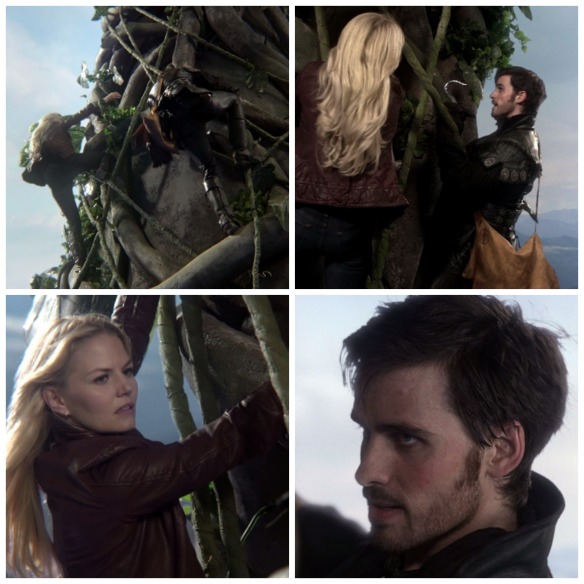 6. (Tallahassee) Possibly one of the most famous Captain Swan scenes. Hook is tending to Emma’s injury and bandaging her hand with the help of his teeth! (Bonus, he ties the knot without breaking eye contact with Emma). Their chemistry was 100% sizzling here!

7. (Queen of Hearts) The famous heated sword fight, with cheeky lines and a good punch thrown on Emma’s behalf!

8. (In the Name of the Brother) He may have just been thrown through the air by a car, resulting in broken ribs, but he still manages to flirt with Emma.

9. (And Straight On Til Morning) The time that Emma told Hook that they understood one another and that he had the choice of being alone or joining them and being a part of something.

10. (And Straight On Til Morning) When Hook turned his ship back around to help Emma.

11. (The Heart of the Truest Believer) When Hook, who has always referred to him as Baelfire, thoughtfully toasted “To Neal” with Emma, because that is who she knew him as.

12. (The Heart of the Truest Believer) “Actually, I quite fancy you from time to time, when you’re not yelling at me.”

13. (Lost Girl) The time that Hook asked Emma about our world’s version of him and he didn’t understand that waxed mustaches and perms are bad.

14. (Lost Girl) Sharing rum directly from the flask for the first time and Hook genuinely wanting to get to know Emma, but with Emma’s walls still so high, she walks away.

15. (Quite A Common Fairy) The time that Hook used his hook to open a coconut for Emma and sent her an adorable look as she accepted and drank from it.

16. (Good Form) When neither of them could handle it

17. (Good Form) When Hook unknowingly quoted The Princess Bride. “As you wish.”

18. (Ariel) When Hook revealed that meeting Emma allowed him to move on from Milah, even though he thought he never would.

19. (Dark Hollow) The time that Hook promised Emma he would win her heart and that it wouldn’t be because of trickery… It will be because she wants him.

20. (The New Neverland) When Emma was jealous at the thought of Hook and Tinker Bell hooking up

21. (Going Home) Hook promising Emma that he will think of her everyday and Emma responding with; “Good.”

22. (Going Home) When Hook believed that his love for Emma was true enough to bring back her memories, but he wasn’t aware that true love’s kiss doesn’t work on memory loss.

23. (New York City Serenade) When Emma indirectly questioned his honesty about changing, Hook informs her that he didn’t stay because there was nothing in the Enchanted Forest for him, alluding to her. 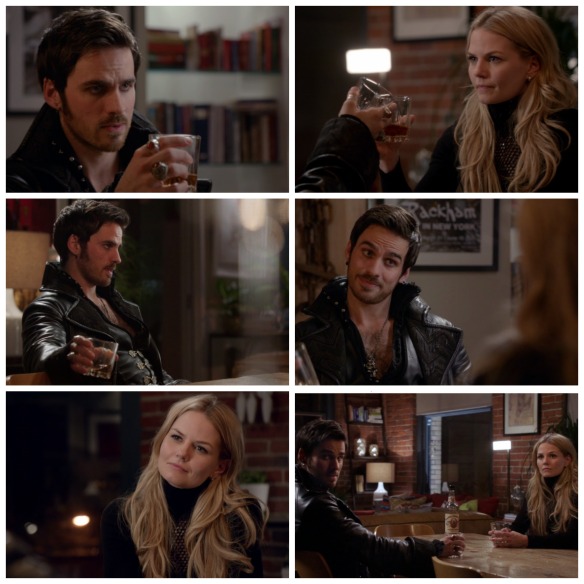 25. (Witch Hunt) When a jealous Killian ratted Emma out to her dad that she almost married a flying monkey.

27. (It’s Not Easy Being Green) Killian offering to watch Henry so Emma can battle the Wicked Witch and allow for Henry to learn about his father.

28. (The Jolly Roger) Killian professing his love for Emma vocally for the first time. “I swear on Emma Swan.” 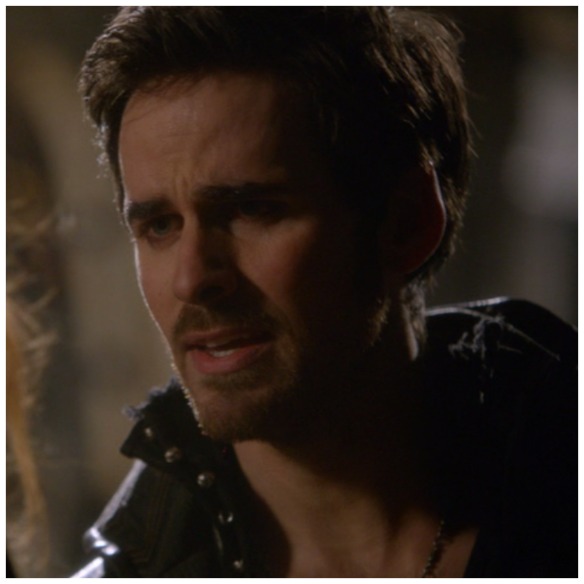 29. (Bleeding Through) Killian trying to be a gentleman and guide Emma down the stairs. 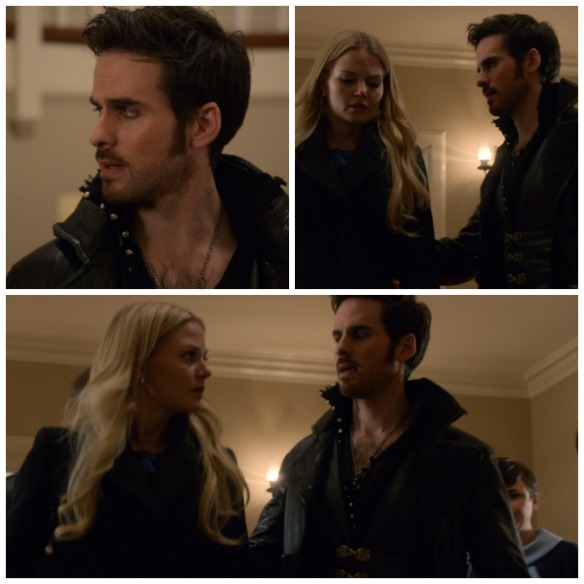 30. (Bleeding Through) The first time Emma was carefree and happy around Killian, as she practiced her magic.

31. (Kansas) Emma choosing to save Killian over her magic and begging his unconscious form to come back to her.

32. (Snow Drifts) When Emma flirted with Past Hook in the tavern.

33. (Snow Drifts) And then went on to make-out with him on the Jolly Roger. 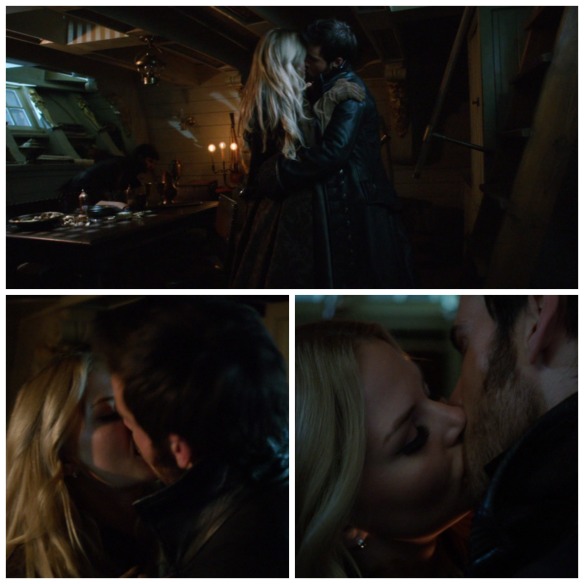 34. (Snow Drifts) When Killian got Emma’s first dance at her first royal ball.

35. (There’s No Place Like Home) When Killian held a distraught Emma in an attempt to offer her some comfort as they watched Snow “burn”. 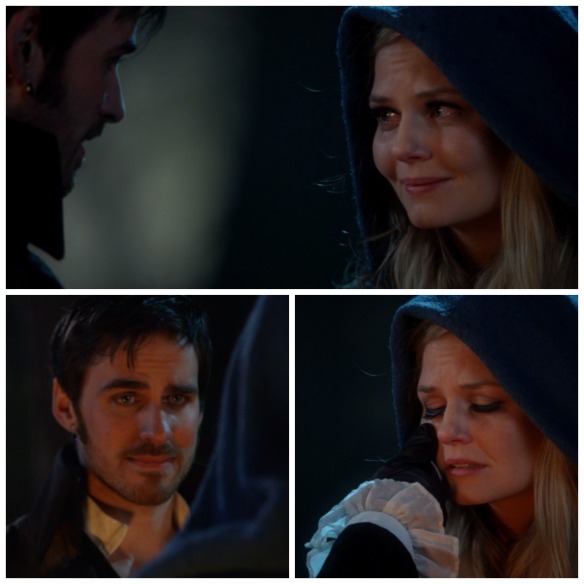 37. (There’s No Place Like Home) When Killian finally admits he traded the Jolly Roger to find her and they engage in a well overdue passionate kiss.

38. (A Tale of Two Sisters) When Emma kissed Killian softly in the woods and told him to “be patient.”

39. (White Out) Their relieved hug when Emma safely makes it out of Elsa’s ice cave. 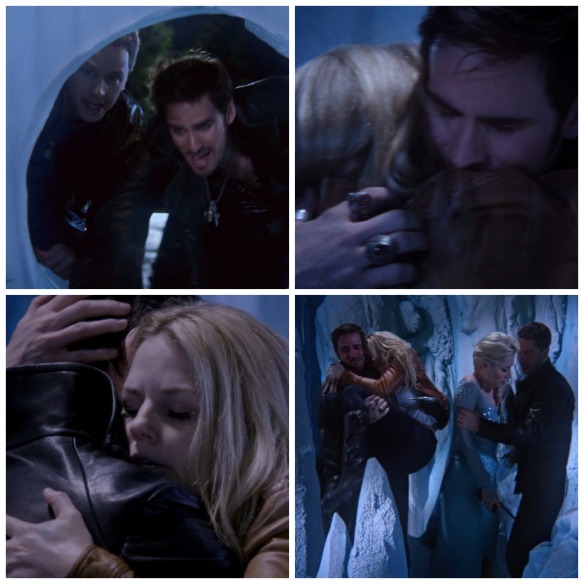 40. (White Out) Emma cuddled in Killian’s arms as she slowly warms up in the Blanchard apartment.

41. (Rocky Road) The time Killian told Emma he was good at surviving and pulled her into a passionate kiss in the middle of the street.

42. (The Apprentice) When Killian took Emma to a posh Italian restaurant for their first date. 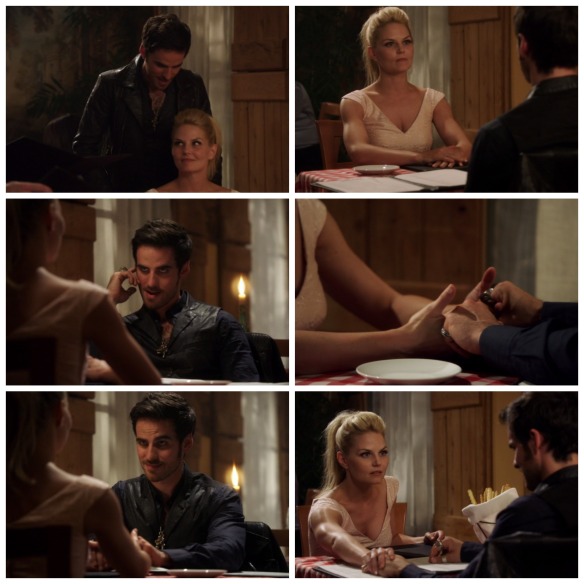 43. (The Apprentice) And of course when Killian got his wish and was able to hold Emma with both hands as they kissed goodnight.

44. (Breaking Glass) Killian sweetly kissing Emma on the cheek as he leaves to take Henry sailing for the day.

45. (Breaking Glass) Killian comforting Emma when he sees her tearing up as they watch the video of Young Emma and Lily.

47. (Smash the Mirror) When Killian promised they would find a way to defeat the Snow Queen together. 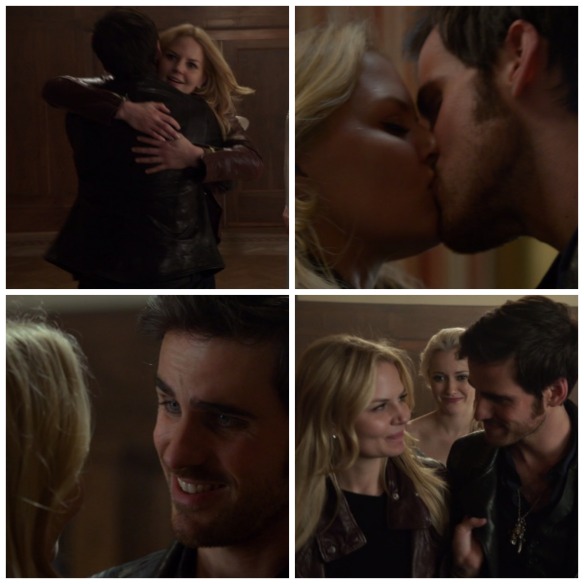 48. (Fall) Killian coming to say goodbye to Emma, thinking this would be the last time he would see her.

49. (Heroes and Villains) The time Emma returned Killian’s heart to him and then they made out against the wall.

50. (Darkness on the Edge of Town) Emma assuring a worried Killian that he does have a mark in the hero column. 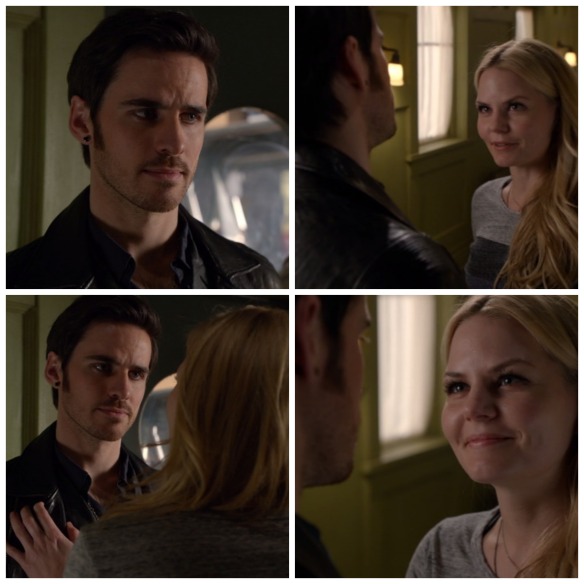 51. (Unforgiven) When Killian brought Emma grilled cheese and onion rings for lunch because she missed out earlier.

52. (Unforgiven) Emma and Killian promising one another that they will choose to see the best in each other.

53. (Unforgiven) Walking down the street in their own happy bubble.

54. (Poor Unfortunate Soul) The time that Killian told Emma she was his happy ending.

55. (Best Laid Plans) Killian being jealous of a “wooden man-child”. 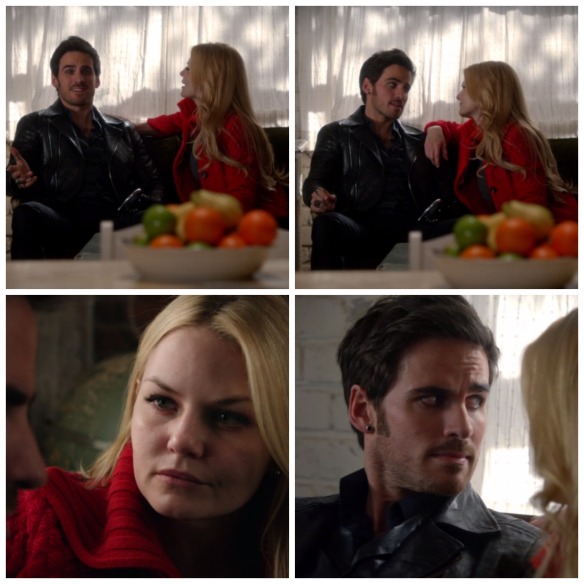 56. (Best Laid Plans) When Killian comforted Emma at the docks after she learned her parents secret. 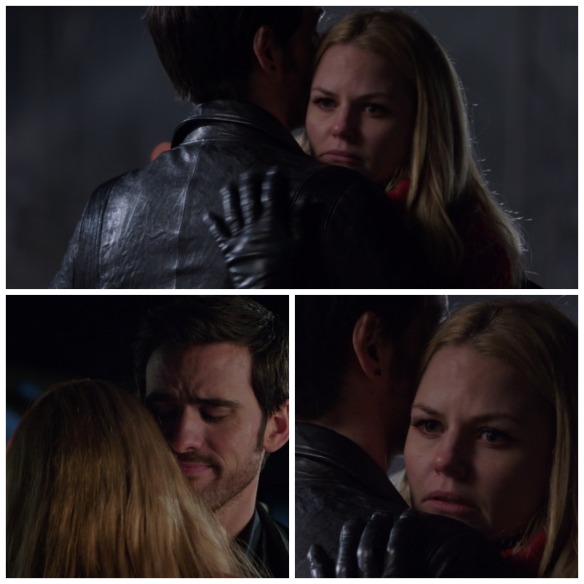 58. (Mother) Hugging one another tightly as they reunite after Emma arrives back from New York City.

59. (Mother) When Killian told Emma that he hopes it’s his job to protect her heart. 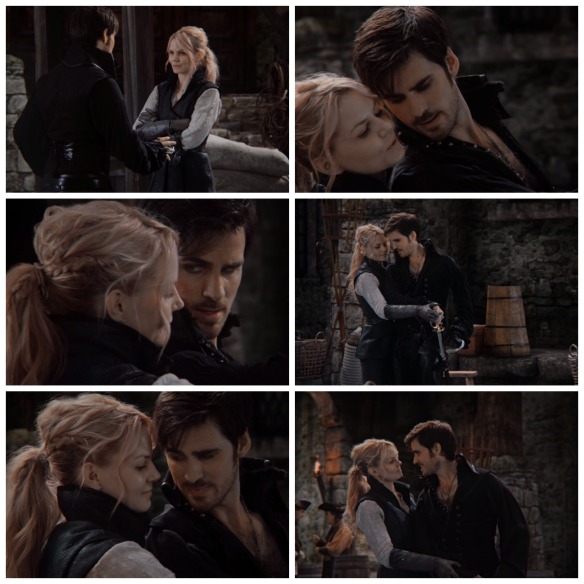 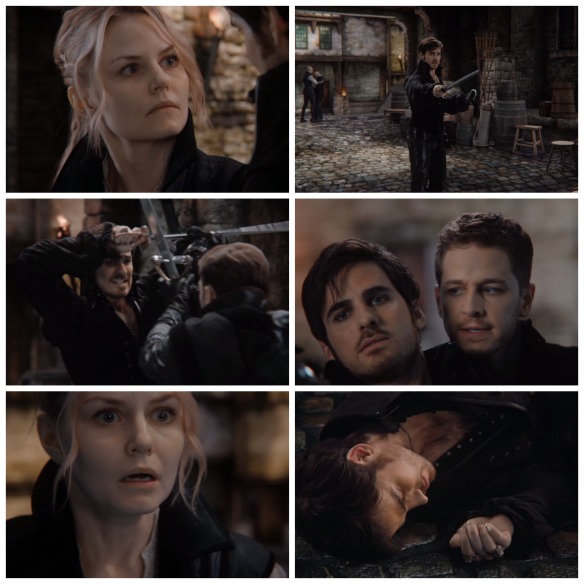 63. (Operation Mongoose Part Two) Emma being so overjoyed to find Killian alive that she runs, hugs and tackles him to the bed.

65. (The Dark Swan) The time Killian used soft-spoken words to talk Emma out of killing Merida.

66. (The Price) The time Killian passionately kissed the Dark Swan, attempting to use true love’s kiss to take the darkness out of her.

67. (The Price) Emma and Killian at the Camelot ball. 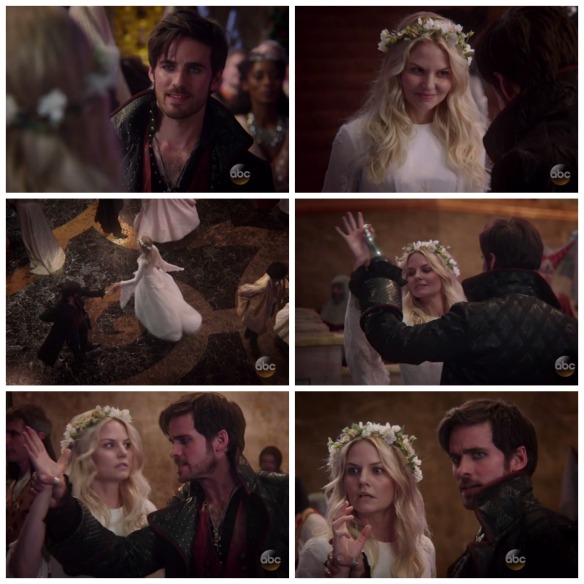 68. (The Price) Emma kissing Killian in an attempt to chase away the darkness after healing Robin. 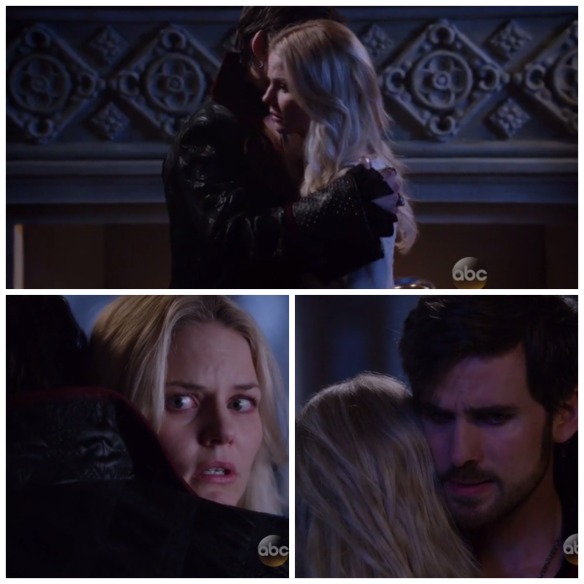 70. (The Broken Kingdom) When they spied on Henry and Violet; Killian looking amused and Emma in protective “mom-mode”.

72. (The Broken Kingdom) Their romantic moment in the Middlemist Field.

75. (Nimue) When Killian tells Emma he loves her for the first time and she says it back.

77. (Birth) Emma healing Killian’s wound, before they share a cuddle in the woods. 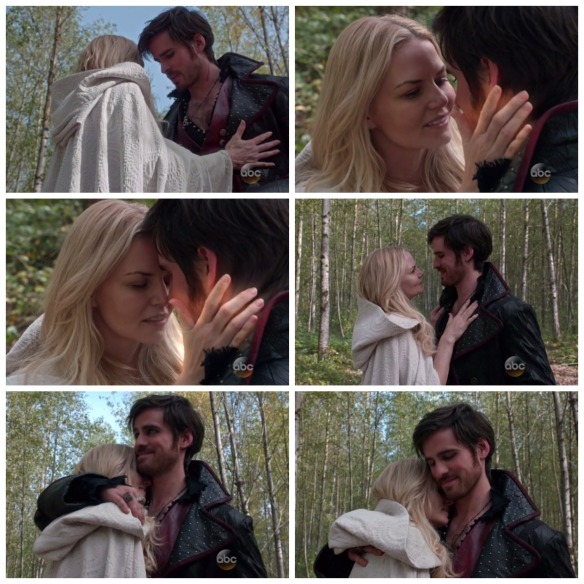 78. (Birth) Emma telling Hook that she wants a future with him and lighting the Promethean Flame when they kiss.

79. (Birth) When Emma embraced the darkness because she refused to lose Killian.

80. (Broken Heart) The time Killian and Emma were Dark One’s and made out in the forest in the middle of the night.

81. (Broken Heart) Dark One “I love you’s” in the Middlemist Field. 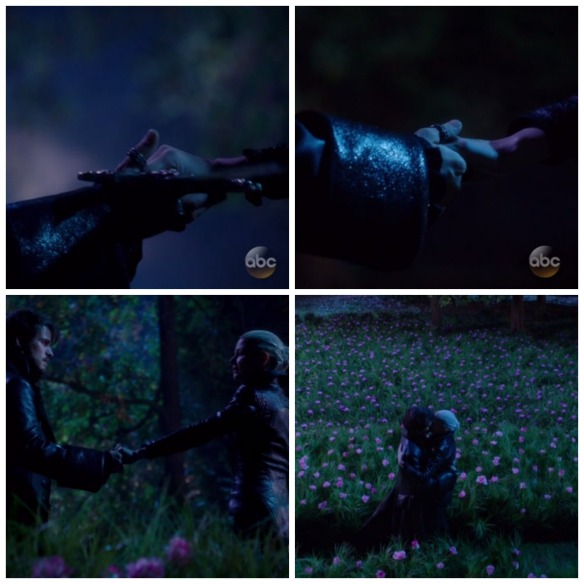 82. (Broken Heart) The time Emma held Killian as the curse surrounded them, just like Snow did with Charming in the Pilot. 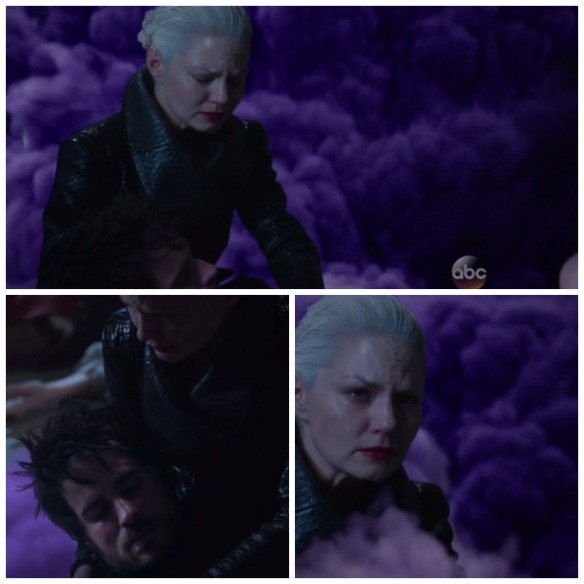 83. (Swan Song) When Hook sacrificed himself to right his mistakes and save Emma’s family and friends from being taken to the Underworld. 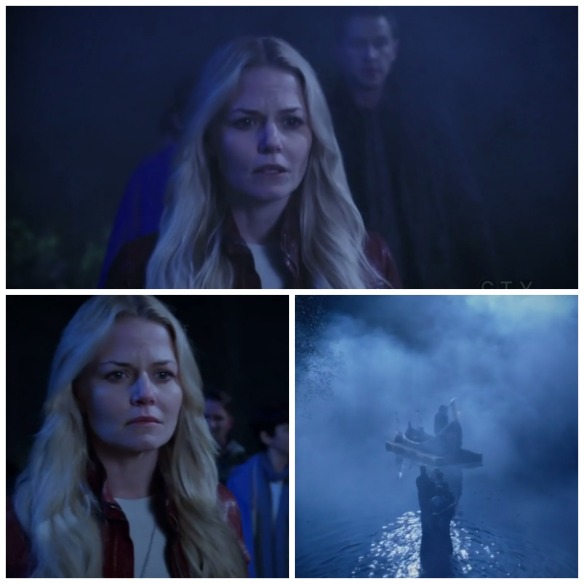 85. (Labor of Love) Killian knowing that Emma was in the Underworld looking for him because of their love.

86. (Devil’s Due) Even with it being an emotional reunion, both Emma and Killian still managed to softly flirt with one another.

87. (The Brothers Jones) When Emma promised Killian that Hades wasn’t powerful enough to knock the handsome out of him and proceeded to heal Killian’s wounds in their house.

88. (The Brothers Jones) The time that Killian moved a cobweb out of Emma’s way.

89. (The Brothers Jones) When Killian told Emma that he wants their future together instead of moving on. 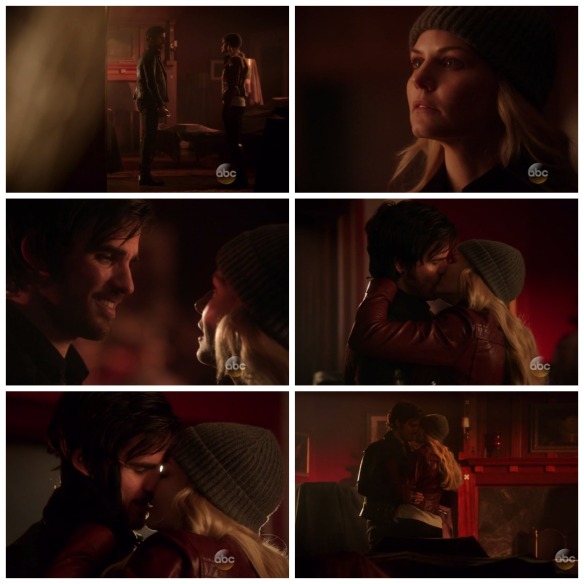 90. (Our Decay) Emma and Hook looking for a way to beat Hades together.

91. (Her Handsome Hero) When Hook was concerned about Emma not having enough sleep.

92. (Her Handsome Hero) The way Emma and Killian look at one another when Snow says; “Love is worth it.”

93. (Ruby Slippers) Emma hugging Killian when he reveals that he was able to cross Snow’s name off the gravestone and write David’s instead, allowing for Snow to go home to Neal.

95. (Firebird) Of course we can’t forget the time they were confirmed as TRUE LOVE!

96. (Firebird) Their heartbreaking goodbye at the elevator. 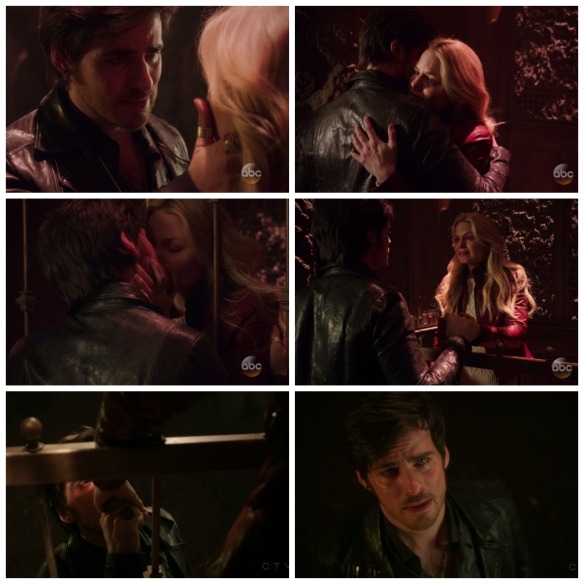 97. (Last Rites) When Emma lovingly stroked the page of her and Killian dancing in the past in Henry’s storybook. 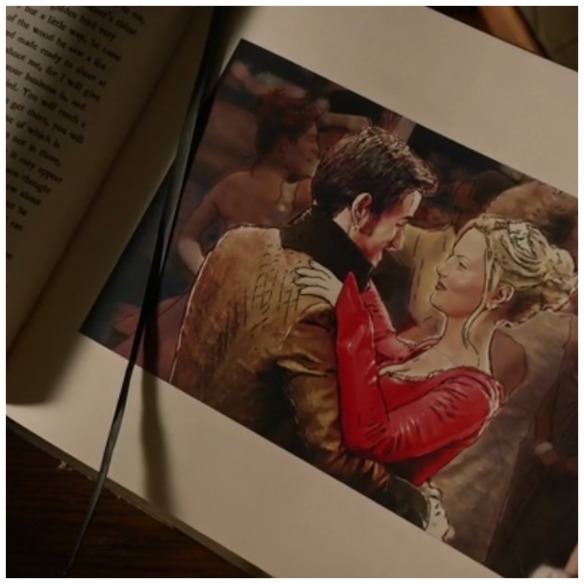 98. (Last Rites) Their emotional reunion after thinking they had lost one another forever. (PS. Bless Zeus for sending Killian back to where he belongs, which is with Emma).

99. (An Untold Story) And another reunion in New York City. 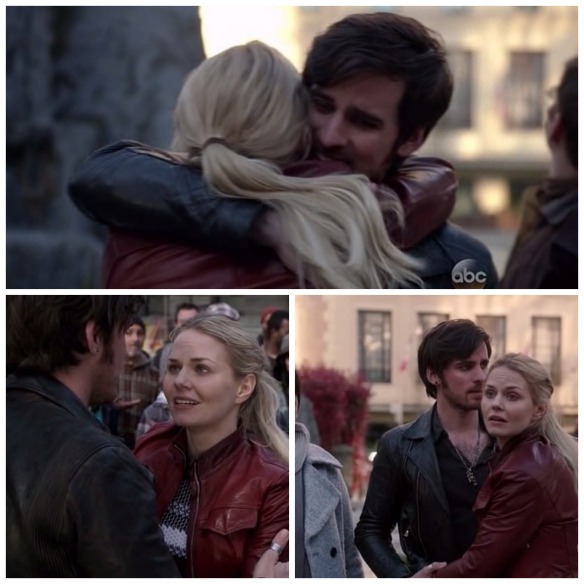 100. (An Untold Story) Emma’s first “I love you” when everything is calm. (Bonus, when they kiss, Killian lifts her!) 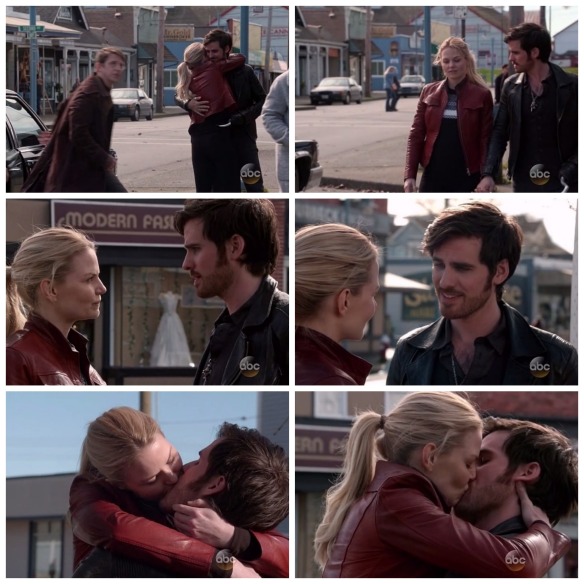 See you in season 6 for more swoon-worthy Captain Swan moments!