Caro and I, along with a couple guest writers, Kristin and Marina  (Welcome ladies!), weighed in on episode 6×06 of Once Upon a Time! I know this is super later. College and stuff. 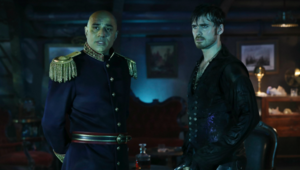 Okay, deep breaths. What did you think of the episode as a whole?

Caro: It was a great one! I really liked the way the writers connected Nemo’s story with Hook’s. Simply brilliant! It gave me a lot of Captain Cobra feelings, because the situation they were put in marked a big step for Henry and Killian’s relationship. Also, I enjoyed watching Emma helping Aladdin by showing him her past mistakes. She recognized her errors and has learned from them. If that’s not an excellent character development I don’t know what it is.

Kristin: This was absolutely my favorite episode of the season so far. In fact, I think it was probably my favorite episode in a long time.  This episode was really necessary in terms of progressing Hook and Emma’s relationship.  Emma and Henry is the core relationship of the entire series.  Emma and Hook’s relationship could not progress the way it needed to without there being some kind of understanding between Hook and Henry.  There are a lot of blended families in today’s society and I think that this episode was a reaction to that as well.  I also loved seeing more of Hook’s backstory.  Aside from being my absolute favorite character, he’s had such an interesting story and so much of it has been about his ability to let go of his anger and his need for vengeance.  Hook’s entire storyline is how you do redemption.  Also, Colin O’Donoghue is the master of the facial expression and this was his best episode yet, hands down.

Marina: It was very good. Not only they brought one of my favorite stories from my childhood but they tangled it with Killian’s need for a family.

How did you feel about Henry’s reaction to Hook about the sheers? Did you think he was too harsh?