Beware: fangirling ahead. But you already probably guessed that. In today’s post, we disclosed what our favorite arc has been throughout Once Upon a Time’s run: Neverland, Frozen, and Camelot/Dark Swan. Watch us fangirl over our favorite arcs below! (I (Madeline) apologize for my awkwardness !) 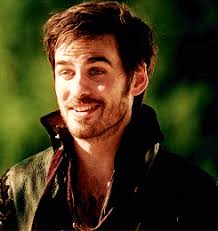 Madeline: This was super hard for me. Naturally, Emma Swan is one of my favorites, but Carolina picked her, so I wanted to go a different route. So who is my favorite character on the show? You probably already guessed: Killian Jones.

His character development from season 2 to season 5 has astounded me. He started as a villain, hell-bent on revenge. Nothing else mattered to him besides revenge. Then Emma came along, and he wanted to change. It was hard for him at first, but Emma brought out the side of him that he thought he lost. He was no longer a villain. He was able to fight that darkness. (Well…until he got to turned into the Dark One, but that’s another story)

As the seasons progressed, the audience saw how much Killian had changed. Sure, he was still a pirate, but his heart changed. He started seeing things in a heroic way. All thanks to Emma. He changed for her and for love. Killian didn’t care about petty revenge, he cared about his future and ensuring he was worthy of one. It was hard for him to accept that he was now a hero and that he was worthy of Emma’s love, but he is. Killian Jones does have a mark in the hero column! From his good looks, sassy comments and inneundos, and his big heart, Killian Jones has wedged his way into my own heart. His love for Emma is adorable, and his redemption arc has been impressive! Carolina: Emma Swan is definitely my fave! She’s such an interesting character that has grown throughout the seasons thanks to all the good and bad experiences she has lived. On season one she was a very hard woman with her walls up, but as she opened herself to others it was easier for her to find the happiness she had been looking for.

I admire her because she looks like a cupcake but is actually a badass girl who won’t stop fighting for the people she loves. In some ways I see myself in Emma because I find it hard to believe in me whenever I have a tough challenge. However, once I start believing things work out, just like Emma.

She has learned the importance of family, she knows that they are the most valuable thing in her life and that without them she would feel just empty. It’s beautiful, if you may ask me, how Emma Swan has put her family above all.